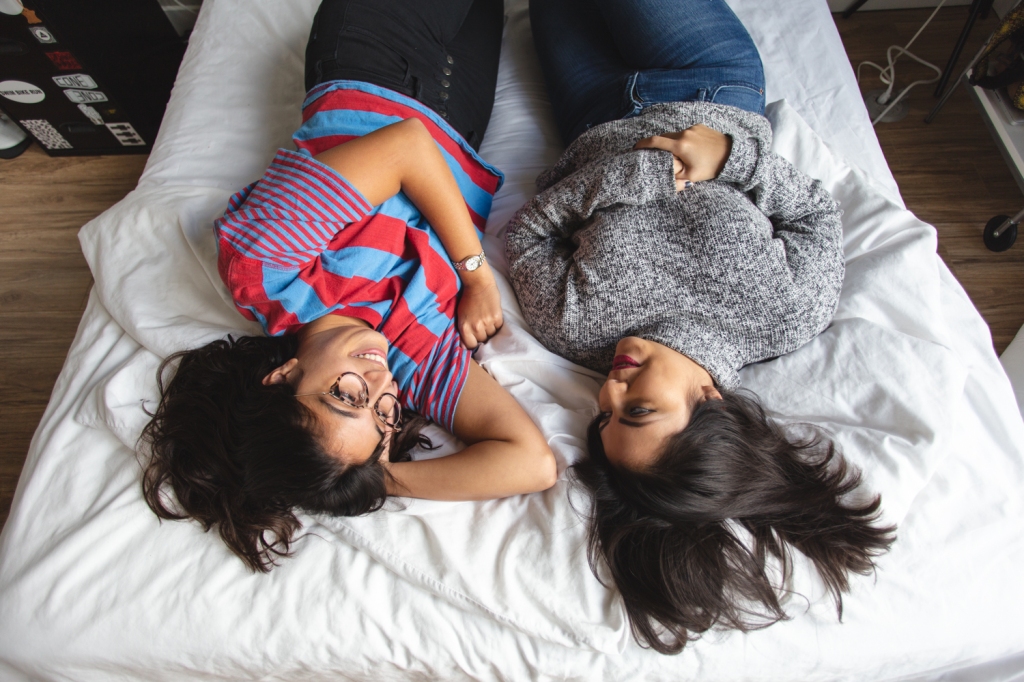 I was standing at the baggage carousel chugging a liter of water I bought from a vending machine. I was so excited to be there, but also nervous. I hadn’t spent this many days with my friend in nearly five years. We used to live together, sleep in each other’s bed when it was cold. Thousands of miles and an ocean make staying super-duper close really hard. I thought we both knew that. We’d talked about it.

I walked out to find her next to all of these families anxiously awaiting their missing members. We hugged so close.  I could tell she was nervous too. After only five minutes, we were talking as if we saw each other every day. After a couple days it felt so natural to be there; I loved meeting her people and learning her new routine.  Having that much time was something I think I really needed, just as a reminder, like my soul whispering to me, “She’s one of your people. Don’t ever let that get lost.” I cried the entire taxi ride to the airport. I can’t wait to get back.

It makes me furious that I can’t think about friendship without thinking about her, even after more than two years. I don’t think I ever fully understood what friendship was all about until this important one ended.

Anytime I look back at the conversation that ended it I look back at it differently. Usually sparked by a Facebook memory of old times and fond memories, I start thinking “how could that have become this?” and then I remember. “This” is better than that. “That” Konmaried itself.

I was about to lose it. I could feel the tears, the sobs, and the choking breaths. They were all being held in between my shoulders. That fucking woman kept asking me questions, it was like she was poking at me, waiting for it to all explode. I kept answering in short words: “yes,” “no,” “okay” I didn’t even care what I was agreeing to or what I was saying. I needed to get out of there before those emotions started spewing out of every hole in my head. But it was too late.

The woman didn’t know what to do at that point. Emotional intelligence was not her strength. Finally, I sobbed at her, “I will be fine, just let me OUT OF HERE.”

There was no clear way out of my office. I’m sure a dozen people heard me scream through her office window, because every room in the office has a glass wall. I gunned it for the main door, grabbing my phone from my desk.  The closest thing to privacy I could get was just going outside even if I’d be surrounded by strangers.

We scooched in tight and smiled for the camera. After the very reliable bud took a handful of pics, I looked through them on my phone. I don’t think I’d seen that smile on my face in a long time. At least I hadn’t captured it for eternity.

The rest of the girls were talking, making plans for what we were going to do the rest of the day. Honestly, I had no idea how we would fit them all in but they seemed to believe it was possible. I was distracted by my smile, though. I realized that for the entire twenty-four hours prior, with the exception of the time I was asleep, I had been talking and laughing with these two women. It was like somewhere in the mountains they ignited something in me that I just hadn’t been able to find at home in a while.

I was reminded of myself, the self that I love. Reintroduced to her in the company of some of the most contagious energy I’ve ever experienced in this world. When I got home I missed them and the mountains, but I was reminded that the me I found there had existed at home before. I set out on a quest to find her, to remind her it was safe. I really feel like she’s back, and I have them to thank for it.

Some of my oldest memories are with her.  Sometimes I can’t tell if I actually remember things or know them from photos but either way, as far back as I could speak complete sentences she’s been in my life.

Our only falling out was probably two years long. When we finally reconciled, it was over Thai food. I think we both apologized or we both specifically didn’t. The time we weren’t speaking, well most of it, wasn’t malicious. It basically just took us two years to realize there were two valid points being made in an argument and that we ultimately actually just agreed with each other.

As adults, we catch up every week. I just read something about how people who make regular time for the humans that fill them with happiness are the most satisfied in their lives. I thought of her first when I read that.

She hugged me, with some flat hand pats and rubs, and for a minute my thoughts slowed down and I was okay. We were okay.

The week was hard.  Each of us is feeling a lot of things, but I don’t think any of us would use the word ‘happy’ at the moment. We’re confused about our own lives, the state of the world, the infinite cold. But we pile into our spots, weigh ourselves down with blankets, turn on another Lifetime movie, start talking shit, and take a little nap. In that moment, I literally would not rather be anywhere else.

I feel home where they are.