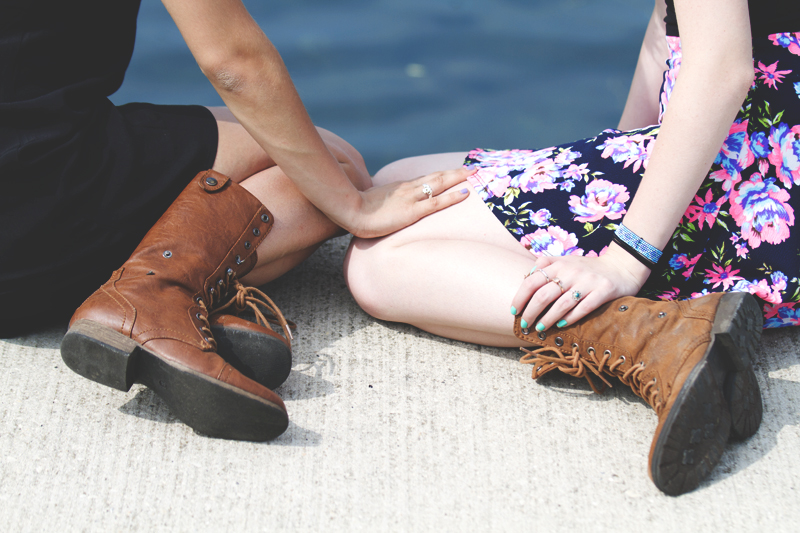 I don’t talk a lot about my bisexuality. For a long time I sort of kept it to myself because I was uncomfortable speaking about my attraction to girls when I was younger.

But now when I think about it, I discovered quite early that I wasn’t only interested in men. I remember the first time I was really attracted to a woman, I must have been 7 or 8 when I first saw this terrible movie “Police Academy”. The big breasts of Leslie Easterbrook completely hypnotised me, so much so that I watched all seven films and, believe me, you have to have a good reason to watch them entirely.

The next year, Shakira came out with “Whenever, Wherever” and its brilliant music video of her dancing completely chilled and relaxed in the middle of the desert whilst a thousand horses are galloping next to her. At the time, I thought it was only a kind of fascination, that the women who made me feel this way were a model of what I would like to be later. But soon I understood that the palpitations in the lower parts of my stomach weren’t the consequences of admiration, but of excitation.

The more I was growing up and identifying outwardly as straight, the more I was realising that I wasn’t really that straight. In high school, I started to go out with guys, and I was happy about it, even though sometimes I was thinking secretly about this cute girl with her brown curly hair.

My first experience came quite late, in my first year of college, and behind the back of all my friends and family. It didn’t last long; a couple of weeks for the most. But I knew that, even if it didn’t work out, I liked it.

At the end of my scholarly years, I started experimenting a little bit more. I had a couple of more girlfriends, or “one night stands”. And, above all, I was feeling freer. I felt that I was finally living in an adult world, a world where you could discuss things that happen to you without being judged for it. What a joke, eh?

So, I started talking about my bisexuality, about my experiences, not about the details but about my choices. Guys (I was mostly hanging out with guys) listened attentively to my stories, and I quickly realised that it wasn’t because of their talent of confidant, but because it was feeding possibly the ultimate​ male fantasy : female homosexuality.

For a few years, I didn’t really mind and, honestly, I found it quite amusing to play with their emotions. But the more I had relationships with men, the more I spoke about my bisexuality to them, the more I saw sparkles in their eyes for stories that never involved them.

During this period, I was going out a lot, and drunk guys full of their arrogant confidence coming onto me with a bad joke whilst I was having a beer in a bar wasn’t fun or flattering for me any more. So, sometimes I was just pretending I was a lesbian to turn them away. And it never did. They never believed me, and when I was asking why they usually just went “I don’t know, you’re just not the lesbian type”.

So, what exactly is “the lesbian type” supposed to mean? Is it something that you have to possess like a little lesbian medallion so they could recognize each other when they are walking down the street? Do you have to wear a t-shirt that says, “I eat vaginas”?

But, no. We all understand what “lesbian type” means. OBVIOUSLY. When you are a lesbian, you have​ to have short hair, wear men’s clothes, walk like a truck driver and fight like Rocky. You have to be a man without a penis. So if you are a lesbian but don’t meet this criteria, you are probably not really a lesbian and should reconsider your sexuality right away. It cannot be another way.

So, of course, I wasn’t going to fool all these lesbian radar sensors. I’m too skinny and short, my hair is too long and sometimes I even wear a dress. ​Way​ too feminine to be a lesbian, you see. Because, let’s be clear, when you have long hair and all the sort of stuff that makes you a “real girl”, you can please the Man, so why would you be attracted to women? Why would you have a relationship with another girl when you could have a strong and protective man full of virility? That is what all women want, right?

No, the world doesn’t revolve around men, stop intruding everywhere you are not invited.

No, there is absolutely no reason for you to chuckle when I say that I am bisexual. You aren’t included in any way in this story, and you will never be.

No, I am not bisexual because I want to experiment or because it could potentially arouse men when I mention it later on.

I am bisexual because I like men but I also like women for what they are, and not because of you or because they look like you.

No, I am not in a relationship with a guy because, with girls, I was “missing something.”

I am bisexual because when I had relationship with girls, I didn’t miss a thing from men, and certainly not their penises.