It’s that time of year, when the drugstores are filled with strange balloons and stuffed-animals to get any lovers off the hook for forgetting the big day: Valentine’s Day.  So many people dread this day.  For them, it’s just “a day to remind you that you’re single” and that being single is the worst thing in the world. For me, Valentine’s Day has never been a day reserved for sig-oths.  I was single for most the February 14ths of my adult life, and I dedicated this romantic day to a different kind of love: my love for my college best friend, Erin.

It started as a small candy exchange our first year in college.  The two other Ladies in our friend-group were seriously involved with their boyfriends and we wanted to do our own thing!  I think it was kind of a defense mechanism at that time, if I’m being honest.  It didn’t seem fair for us to be left out of this “special day” just because we weren’t in love with anyone or romantically involved.  It ultimately evolved into real “dates” with heartfelt gifts and everything.  Our Valentine’s Days are some of my favorite memories in my entire life. 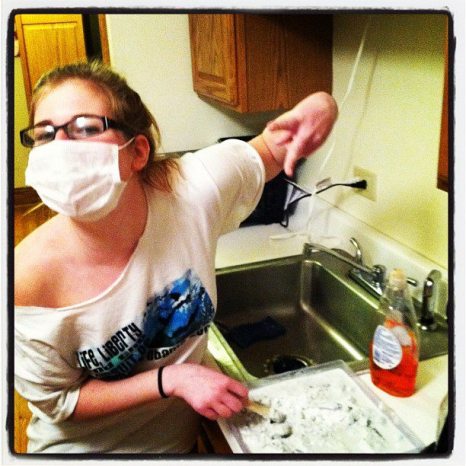 Lookin’ adorable at dinner with our radios | Valentine’s Day 2013

My favorite one was probably our junior year in college.  Whenever we went to parties, Erin would bring her alcohol to the party in a mason jar.  It was my favorite thing, and to her credit took place much before mason jars were the Trendiest Things Ever.  That year for her gift I decorated mason jars with sparkles and lyrics from Our Song “Wonderwall” by Oasis (we borrowed it from Girls Season 2).  We got all dressed up for a special dinner date that her sweet mother was letting us put on her credit card, and exchanged gifts.  Erin bought me these secret spy walkie-talkies that look like mutant wrist-watches.  It’s still one of my favorite gifts I’ve ever received, since I’d always wanted a toy from the spy aisle! We went to dinner and had the best damn time and continued the tradition until she moved to Spain.

The first Valentine’s Day we didn’t spend together, I was in a relationship. Still, this day did not feel like it was for my boyfriend, it felt like it was for something else.  I was on a business trip in New York that week, and my boss suggested I hang out in NYC an extra night (which would keep me there through Valentine’s Day).  Much to my partner’s dismay, I jumped on the opportunity and I didn’t think twice about it.  It was a day for ME! I started the day treating myself to new sneakers.  In the afternoon, I got a kick-ass deal on a ticket to a Broadway show, one I had wanted to see since I was a little girl, and I sat between two couples and saw it by myself.  To be clear, it was fucking awesome.

I never dread Valentine’s Day because I see it as something I can dedicate to the things that make me happy and whole in my life.  Sometimes that’s me, and sometimes that’s my friends.  I understand wholeheartedly the pit-in-the-stomach feeling that comes with this stupid “holiday.”  Especially if it’s something you’ve always thought about since you were little.  While it’s easier said than done, I found that by never letting that day be about romantic love, it never could be about that.  This year, I’ll be enjoying a night with tacos, margaritas and my two favorite (single) Ladies and I can’t think of anything that sounds better.