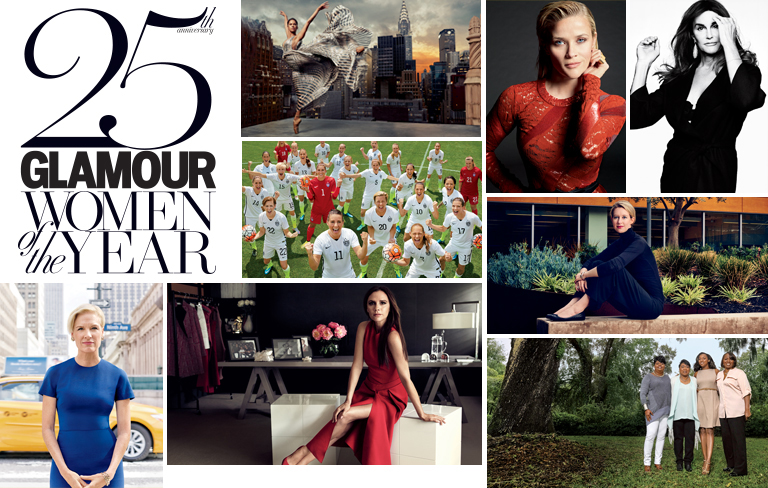 Glamour magazine is known to be ahead of the curve in comparison to many women-targeted publications, consistently supporting strong women and publicly backing women’s rights campaigns. Although one can still find outdated and cringeworthy advice, (‘13 Ways to Lock Down a Man’ anyone?), Glamour uses their impact on the mainstream to promote a more empowered stance for all women.

That being said, Glamour sure does know how to throw a killer party. Glamour recently hosted their 25th annual Women of the Year award party in New York City. Hosted by Amy Schumer, the event honored women such as Reese Witherspoon, Victoria Beckham, Elizabeth Holmes and Misty Copeland.  Beyond the honorees, in attendance were modern sheros and fabulous icons alike, such as Viola Davis, Goldie Hawn and (holy shit, I would die) Madeleine Albright. As one could expect, the evening brought an onslaught of tear-jerking moments and ‘can-I-get-a-hell-yeah?!’ speeches.

One such ‘hell yeah’ statement came from Seth Meyers – a man championing for women’s rights, a true ally. He told every girl and woman in the audience something we all need to be reminded of from time to time: “Never waste a second of your time on a man who doesn’t want your input and advice.” Cheers, Seth. Well said.

To me, there is nothing better than an event where women celebrate each other’s accomplishments and are able to mourn each other’s losses (see the moving speech by the survivors of the Charleston massacre). I want to personally thank Glamour for hosting this event for a quarter century – no small accomplishment considering it wasn’t until 1993, three years after the Glamour Women of the Year debut, that marital rape was outlawed nationally.

The historic impact of this event for the industries these women represent – entertainment, business, sports, music, science, medicine, education, and politics, must have been monumental – perhaps even outrageous when it started out. This reminds me just how far we’ve come in a short 25 years, and it’s all due to the centuries of female activists who came before us.  Thank you to them and to the women in these industries who fight tooth and nail every day to get women’s voices heard.

I was particularly interested in Reese Witherspoon’s acceptance speech, as she talked about the lack of movies being produced with strong female leads  (not supporting leads, mind you) in Hollywood and the addition lack of desire by powerful film studios to make movies with those roles available. This situation in Hollywood represents a serious issue across many industries. Women are welcome to work, they just can’t typically get past a certain point. Take advertising, for instance: women make up 49.7% of the advertising workforce, yet only compose 3% of the Creative Director positions (Data from The Lipstick Economy*). So, while it’s amazing to celebrate the few that have climbed their way to the top and are making an impact, we must keep in mind that there is so much more to do.

These speeches lit a fire in me. They reminded me that we can beat the odds and kick ass and remain true to ourselves as women. We can change the skewed numbers in the gaps that currently define us (wage, class, respect). We just need to ask the right questions and then go out and create the answers for ourselves. Reese asked a particularly important question: ‘What do we do now?’

What do we do to make the world take notice of our empowered, intelligent, talented women? How do we continue and expand events in which such women have the opportunity to lift each other up and talk about their ambition and success? How do we create a society that does not shush girls for acknowledging their own successes, does not accuse them of being bossy or aggressive when they’re proud? What will you do about this?

As for me, I will keep talking and writing. I will take pride in my accomplishments and not shy away from my naturally ambitious disposition. I will say my female heroes’ names and champion their efforts to make the world a better place. I plan on lighting up the web with more and more information on strong women so there is never again a question about whether events celebrating women are necessary or interesting. The question will become: how did we ever live in a world that didn’t empower women?